Mobile legends should be familiar to most mobile game players. Although 5 years have passed, the popularity of this famous 5v5 Moba game does not seem to decrease. I believe most players know that to play this game, Internet speed accounts for a very important factor. In addition, slow Internet speed also seriously affects the win rate of the game.

However, there are still many places in the world with the imperfect network coverage. In some areas, the ability to even open the game is also a problem. So today, I will share how to play Mobile Legends in offline mode. Not only that, in this article, we will also share 5 offline games similar to mobile legends.

This player brings many benefits, for example, when the internet speed is slow, the player can practice game skills alone. Moreover, for players in areas with relatively slow internet speeds, offline mode allows them to experience the game better without the slightest delay.

How to play Mobile Legends offline?

The method we want to share is very simple. We made it into a step-by-step guide. Please refer to the following steps:

1. First, connect to the Internet, and then log in to the Mobile Legends game.

2. Enter Custom Mode, and then select one of the modes.

3. Choose the hero you want to play.

4. After selecting the hero, turn off the network connection and enter the offline mode.

At the same time, some players want to know if there is an offline game similar to mobile legends. So we have also shared some more information. We will share 5 Mobile Legends offline alternative games. We have made it into a list and will briefly introduce the game.

This game has been launched on Google and has a good rating of 4.1 stars. In this game, like most MOBA games, the hero has 4 unique special skills (abilities). What surprised me is that this free game has 40 maps. Players who want to try it can go to the google play store and search for “Legendary Heroes”. This is a Chinese Moba game. The game interface is similar to the famous computer MOBA game, Dota. This game has been around for many years, but it has not been launched on the google play store. Players who want to download can search for “Fight for freedom apk” or “MOBA for freedom apk” on Google 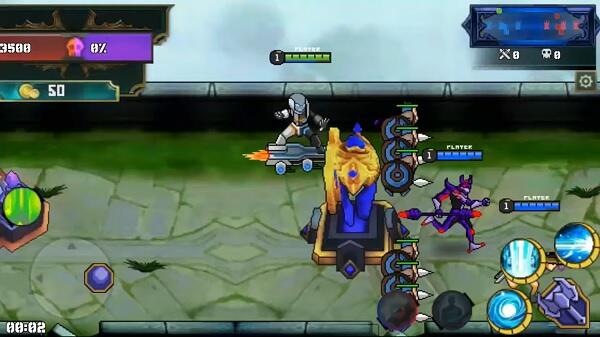 The similarity between Moba Mugen and Mobile Legends is very high. However, Moba Mugen is only an 8 bits version of mobile legends. This game has not been launched on google play either. Players who want to try it out can search for “Moba Mugen apk” on Google.

This is also a Chinese Moba game. Due to the incomplete development, this game has only 7 heroes for the time being and only has a man-machine mode. Players who want to try it out can download it from this link.

Let’s take a look at the gameplay of these games.